Hello all and welcome to the Card/Character thread for "Advent of the Empire."

This thread will serves as a sort of Roster for the players in the role-play. Please only post here if you are posting your character, card or a question regarding the creation of them.

That being said, let's crack on with it.

In Advent of the Empire (AOTE for short), players play as Monsters in a world similar to the Duel Terminal world or the Spirit World (as seen on YuGiOh Doma Arc/5Ds). These monsters will be based on custom monster cards that you, the player, will create.

When making these cards, you can choose to:
1. Make a stand-alone monster that is not a part of any archetype
2. Make them a member of a pre-existing archetype
(This means you cannot make an entirely new archetype for this monster. Sorry, but this makes the rp a lot easier for me to manage.)

Now when you make these cards, don't forget that you also NAME them, not just a card name. (Remember that monster spirits have names that are not their Card Name such as Dark Magician Girl being Mana) And feel free to include some lore about yourself. Tell us about what your character has done in their life, or what they're out to do, etc. (Don't worry, I'll work with everyone with the lore aspect to make sure you fit the world still.) ^_^

Note: You may only play as ONE character during this RP. No one is going to run around as multiple characters.
There isn't much else to cover here, that I can think of, so those who have officially signed up may get on with posting their cards and characters.

Name: Rainebell (Raine for short)
[You must be registered and logged in to see this image.]
Lore:

During the war 4 tribes combined their forces and shared their knowledge into forming a group dedicated to elimate their world’s threat, this group was known as “The Ally of Justice”. With their weapons providing successes against the invaders the Ally of Justice decided to learn more from the invader by capturing them and gather data through a “Quarantine protocol”. It was during the moments of Quarantine that they discovered an advanced technology that could solve the problems their weapons had and that was self-improvement and self-awareness.

Reverse engineering this technology the Ally of Justice created their prototype and with the ritual performed by the Ice Barriers, they inserted the soul of a Mist Valley Tribesman who was fallen from battle. With it completed they dubbed their creation “Innocendant Seraph”. After further tests they discovered that she has the ability to assimilate other weapons as she gathered the Code for Catastor and adapted to it accordingly with complete control over the machine making her the ultimate weapon the Ally of Justice ever created.

It did not take long until the Mist Valley learnt of the use of their kin and has slowly started withdrawing from the Ally of Justice after that. They decided to keep her under stasis as they believed the invasion is under control as it is. It has been many years ever since the war ended and in an unexpected event a young spell caster came across the research facility of the Ally of Justice which was long forgotten and abandoned and has accidently released the weapon from her stasis sleep. Waking up with no memories of herself the young spell caster took the machine to her home and called her Rainebell as she doesn’t really have a name to go by.

It has been a few months adapting to the world around her and Raine has started to recall some of her memories and what she was meant to do. She then set herself out to a journey in order to learn more and acquire the Codes left behind by her predecessors.

Last edited by Tweek on Mon Aug 01, 2016 1:51 pm; edited 1 time in total (Reason for editing : Making a revision)
_________________
"Never forget what you are, the rest of the world will not. Wear it like armor and it can never be used to hurt you."
~George R.R. Martin
[You must be registered and logged in to see this image.]
“Sometimes I drink coffee at 3:57 a.m., only I call it beer, and it's really purple wine, disguised as clear distilled water, taken from my invisible car's radiator. She used to like radiator water too, so this also serves as a self-reminder to never share a glass with someone who has had hepatitis.”

Hmm. change the effect a bit so that it can Special Summon itself from banishment IF it's there because of its own effect and I think it can work

Updated.
_________________
"Never forget what you are, the rest of the world will not. Wear it like armor and it can never be used to hurt you."
~George R.R. Martin
[You must be registered and logged in to see this image.]
“Sometimes I drink coffee at 3:57 a.m., only I call it beer, and it's really purple wine, disguised as clear distilled water, taken from my invisible car's radiator. She used to like radiator water too, so this also serves as a self-reminder to never share a glass with someone who has had hepatitis.”

Innocent Sin:
[Card Name] Innocent Sin
[Type] Fiend [Attribute] Dark [Level] 4
[Effect/Flavour Text] When this monster attacks an opponent's monster, you can discard one Dark or Light attribute monster from your hand to your graveyard and double this monster's attack until the end of the next turn. If this monster is destroyed, target one card on the field and banish it.
[ATK/DEF]1800/1000

Lore: Innocent Sin has always been a name she named herself by. Why? Because she doesn't know her own name, it's something that has bothered her throughout her short life. At 18, she hasn't experienced life too much. Secretly, she always wanted friends but she never had the confidence to talk to people, so Sin just doesn't talk to people. Sin wants just one friend. To feel loved and cherished..Just one..

Last edited by Blade_Viper on Thu Aug 04, 2016 2:18 pm; edited 1 time in total
_________________
He is the assassin that people fear, the nightmare of the fearless! He is the a hitman personified. He doesn't deserve the weak, only the strong and the willing. His smirk shows cockiness and personality. He is Blade_Viper. And he is The Cleaner.

This card is also treated as a Fiend-type while face-up on the field. When this card battles a LIGHT or DARK monster; destroy that monster at the end of damage calculation. Once per turn; before you draw: you can declare 1 Spell or Trap card name and excavate the top card of your deck. If it is the declared card: activate that card's effect immediately. If you cannot, or it is not the declared card, banish it.


Lore? "Yknow what dis do"
_________________
[You must be registered and logged in to see this image.]
"He's the hero MADA deserves,
but not the one it needs right now.
So we'll hunt him.
Because he can take it.
Because he's not our hero.
He's a silent guardian,
a watchful protector.
The Demon Knight" 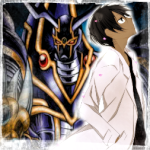 Everyone pay attention please.
THIS post is a fantastic example of:
1. how NOT to enter a role-play.
2. How to be a terrible troll
3. How to NOT to make a fan-card.

Falco, you were not even admitted to the rp when you posted due to the fact that you don't show up often enough to be permitted to do so. Do not make troll posts within the role-plays in the future.

(note: i will replace all this with a card image sometime within the next week or so, im placing in this current entry so i can remember what exactly to put on the card in the future, as well as work out any flaws before final design if need be.)

[Effect/Flavour Text]While this card is face-up on the field, it is also treated as a DARK monster. This card can attack twice during each battle phase. you can use only activate each of the following effects of "Chaos Entities - The Twins" once per turn:

* if another LIGHT monster on the field, except "Chaos Entities - The Twins" is destroyed(by battle or card effect), this card gains 1000 Attack until your opponents next end phase, then you can destroy 1 monster on the field with attack less than or equal to the destroyed monsters'.

* you can banish 1 LIGHT and 1 DARK monster from your graveyard to target 2 Spell/Trap cards on the field, banish them. this card cannot declare an attack the turn you activate this effect.